I was walking along the beach on Amager today and although the air temperature was well below freezing I still spotted a winter swimmer. Whilst I gather my thoughts for new posts this month (it been a bit quiet here whilst I’ve had my mum staying), I thought I’d share this post from last year about winter swimming.

Last week I found myself in the well-to-do suburb of Hellerup as I was craving a browse around a book shop for some Christmas gift inspiration. I found myself drawn down one of the side roads leading to the front as the sun was actually shining and glittering off the sea. I was sitting looking out towards Sweden when I realised that I was sitting right by the Vinterbad or winter swimming area. A young woman emerged from the wooden building (which I now know is the sauna) wrapped in a small towel, which she discarded at the end of the jetty and jumped stark naked into the cold sea. She swam around for about thirty seconds, dipped her head under the water and then climbed out of the sea, wrapped herself in the towel and disappeared back inside, looking pretty pleased with herself. 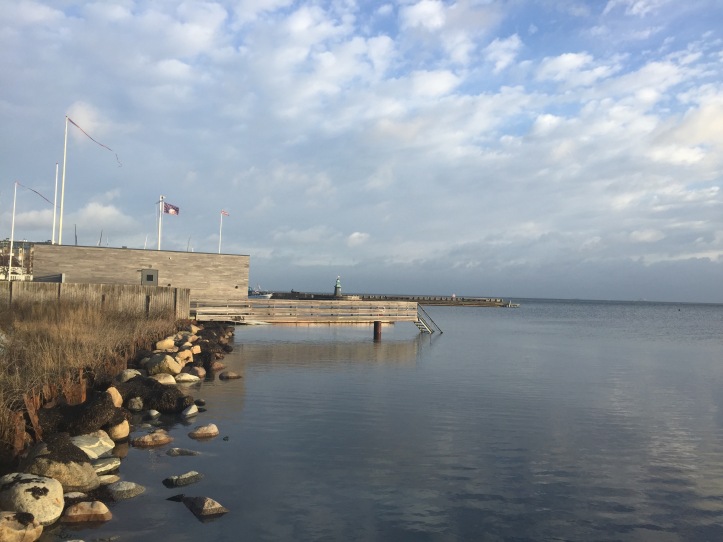 A number of things struck me about this scene (although not the first time I have witnessed winter swimming). One was the complete comfort she had in being naked, she wasn’t super skinny or an exhibitionist, but seemed completely at ease. There was a building site nearby and not one builder even glanced over. Secondly was the total lack of hesitation in jumping into the sea which at a guess was probably well below 5 degrees in temperature. I ease myself into even a heated pool, shocked at the cold. And finally the sheer joy she seemed to have after the swim.

There are 80 official winter swimming clubs in Denmark with 20,000 registered members. Most official clubs, which seem to have saunas in a lot of cases, are full but you can be added to a waiting list.

The oldest club (I think) in Copenhagen is Det Kolde Gys (The Cold Thrill or Shiver) based at Helgoland baths since 1929 and there is a new one at Sluseholmen in the newish harbour baths there with a sauna and a special rotating ice breaker in the main pool. I believe they also have a waiting list. But don’t let waiting lists stop you, there are plenty of jetties all along the coast just waiting for you to dive in to the icy seas. You just won’t have the luxury of a sauna. Last winter I saw a number of winter swimmers at Bellevue coming from their cars in dressing gowns, disrobing, diving in and then returning to their cars to go home. 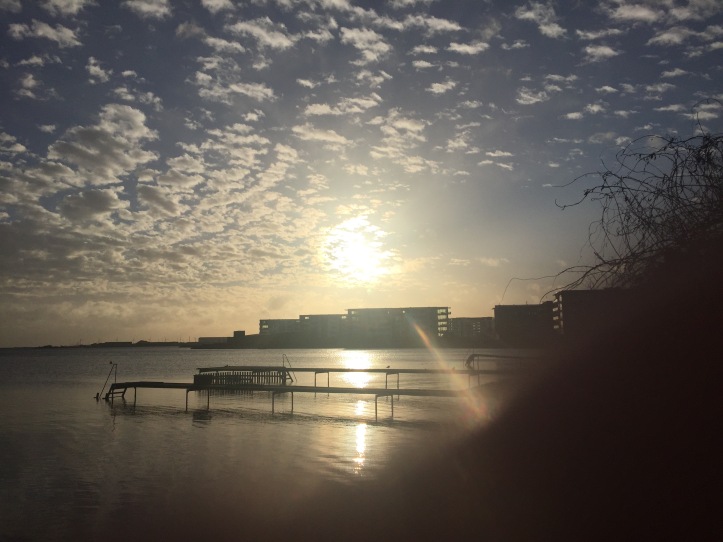 I made me think that perhaps I was missing out on the Viking experience of winter swimming. I love swimming in the sea and the liberating aspect of it but only on a hot day. I have been warned that starting winter swimming is not a whim thing. If you are new to it, it’s best to start at the end of the summer so your body gets used to the gradual change in the seasonal temperature of the water. They say the sea never gets colder than minus 2 degrees otherwise it freezes, although the surface may freeze and need to be broken before you can dive in – you definitely need to be feeling brave. But is it worth it?

There are supposed health benefits to winter swimming even if you only dive in for a few seconds. It invigorates blood circulations, raises your metabolism and flushes out your system of toxins add onto that the amazing natural high that can last for up to four hours afterwards due to the release of endorphins, there is no wonder it is so popular here.

Are you a winter swimmer or is it a step too far into the Viking way of life?