The subject of beggars and homeless people comes up regularly with my son. We travel to and fro everyday on the S trains and on a daily basis we see beggars walking up the train asking for money. After he understood that homelessness was something that, hopefully, we will never have to deal with on a personal level, he started to ask more practical questions about where homeless people sleep and how the shelters are set up. A few years ago I got to know a lovely Hus Forbi seller called Per so I was able to give my son an insight into shelter life from anecdotes Per shared with me. 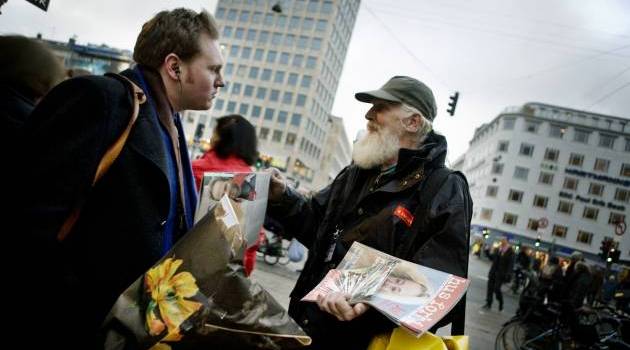 It made me aware that he is more exposed to a lot of perhaps negative aspects of urban life and I am keen not the sugar coat reality too much for him without giving too much information that he doesn’t need to know just yet. I guess this is the Danish way and it has rubbed off on me. I find that very factual answers are the best way forward so he doesn’t use his active imagination to fill in the gaps and become frightened.

There are a number of homeless people we see regularly and they are usually very softly spoken and cheerful when asking for some money to help along with food or shelter for the night. I am sure they also spend money on other things too. Very infrequently do you feel intimidated by them. In fact early yesterday morning one man was passing down the train, asking for money. I said I had no small change and he smiled and said to have a lovely day – with no sign of irony – and then at the last minute turned to my son and wished him a great day at school. 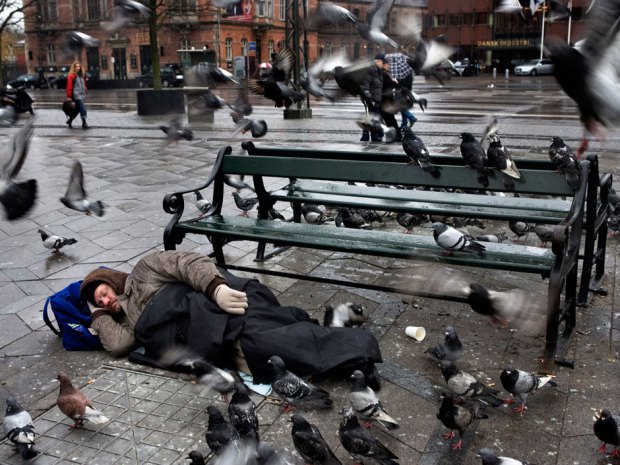 It also made me aware that it is teaching my son to be empathetic to others who are less fortunate than him, particularly as we frequently see other passengers giving money, just a few kroner, to the people begging. It is something that often surprises me about my fellow passengers. I often wonder about the motivation of people who cheerfully give to beggars, knowing that many are covered by the welfare system to a certain extent but perhaps part of it is a positive aspect of Jante Law, that no one person should be better than another. Or part of the idea of the community being greater than the individual.

A lot of what Per had shared with me was about his personal experience, so to be able to answer any more questions from my son as time goes on, this was the perfect time to research the issue of homelessness in Copenhagen a bit more.

Homelessness in Denmark has risen by 23% over the last six years and will continue to rise according to experts, with many becoming ‘hidden homeless’, people who are not necessarily living on the streets all the time but have no home. 32% of Copenhagen’s homeless are homeless because of financial difficulties and 21% because of the lack of suitable accommodation.

Copenhagen Kommune has a whole department dedicated to helping the city’s homeless. Apart from financial aid that the majority of homeless receive (it is only foreign homeless people without a residency permit who don’t), the Kommune also offers help based on individual need – for example to help people get off the street, outreach projects, guidance on social legislation, help with employment and help with addiction and mental health problems. There are a number of different shelters and residential facilities in the city – offering food, shelter, bathing facilities, laundry and access to healthcare (Sundholm Centre is a great example of this as well as offering outreach support).

There are also lots of volunteer groups and organisations working in specific areas of homelessness for example Project Homeless (Projekt Hjemløs), Reden København (working with homeless women) and Fucking Hjemløs supported by Riccos (working with homeless young people), there are many other projects working on this issue in the city and beyond.

I am sure not everyone agrees with tax money being used in this way but for me it is a positive thing to know that there is a safety net for everyone.

You might also be interested in this article about how gentrification is impacting on the homeless community.