It has been a year now since I last drank an alcoholic drink and in that time I have tried a large number of non alcoholic beers, wines and spirits. You can read the ones I tried at the start here.

I have noticed over the last year that the choices have certainly increased and the quality of the beers available has also got better. More often than not I have seen that there is at least one non alcoholic beer available on the drinks menus of many restaurants and cafes here.

For this post I have tried a few new beers and I have ranked them below with some notes on each. Cheers! 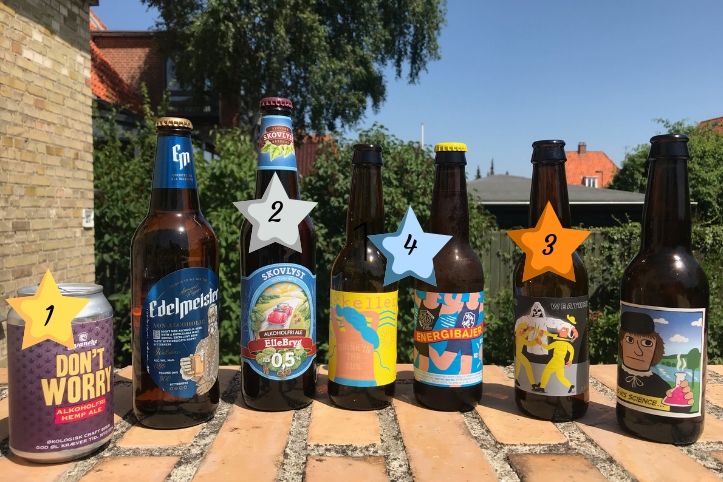 I bought this can of beer at the Bornholm stand in Torvehallerne. I have tried a couple of other Svaneke beers with varying results. Don’t Worry is very refreshing beer and interestingly made from hemp, a very sustainable crop. I really enjoyed this beer and it will certainly be one I will have again.

Don’t Worry is the brand name for Svaneke’s non alcoholic beers and you can see the whole range here. And in English here (but not the full range)

This is a darker beer with a complex pilsner flavour.  I really enjoy beers made with Saaz Hops and this is one that does, hence its very authentic beer flavour. It is kind of fruity but not a fruit flavoured beer. I bought it from the supermarket.

This beer is one of four I bought from the Mikkeller Bottle Shop in Torvehallerne. They usually have a good selection here and you can also get a lot of the beers in restaurants which carry Mikkeller beers as well as in their bars.

Weird Weather is another full and rounded flavoured beer. It is a New England style IPA.

A lot of non alcoholic beers can taste a bit watery but I found this one and the other Mikkeller ones to be very close to a ‘real’ beer. You can see their full range here.

Drink in the Sun – Mikkeller

These two made joint fourth as they were fairly similar on type. Lighter, more summery flavours and would go down very nicely as a drink in the sun or with a barbecue. They are both wheat ales.

The last three here were enjoyable but maybe not ones I would take as a first choice.

Henry and his science – Mikkeller