If you have been travelling around Copenhagen this last week or so you will no doubt have spotted a huge advertising campaign by Arla called Mælk uden mælk or milk without milk. With limited Danish this campaign can seem a little baffling – in fact I was a little confused so headed over to the Arla website to find out more. 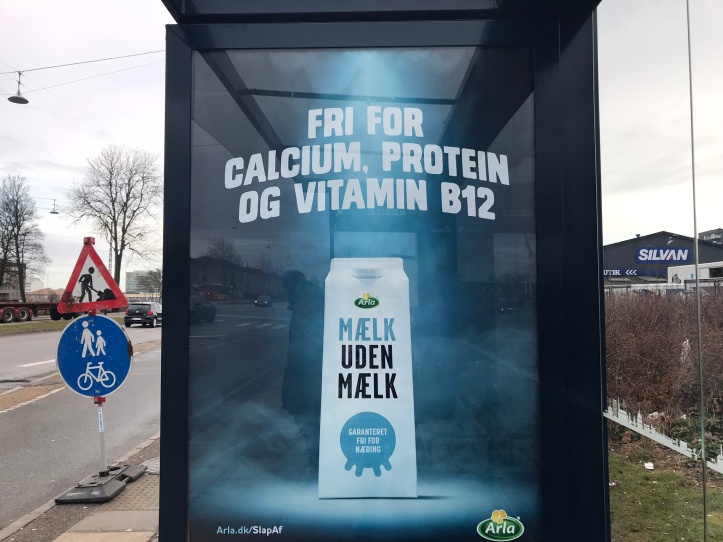 The slogans on the campaign is Milk without milk, free from calcium, protein and vitamin B12. Another says Lose the milk beard and the rest of the goodness. They will be running ads in real life on the metro and bus stops (amongst other locations), via social media and their own website.

Arla is Denmark’s largest food business and their research says that 7 out of 10 Danes think it is a good habit to drink milk but they want to open the debate about food myths and pseudo science and how this impacts on what people think is and isn’t healthy and at the same time promoting milk. They say that every third Danes gets their health information from ‘Dr’ Google and 52% of Danes think it is hard to keep track of what is healthy as there are so many health ‘trends’ on line and in social media. They believe (as I do) that the best way is to eat a varied diet and to use your common sense. The company are quoted as saying that ‘facts are under pressure’. We all know that in the time of alternative facts (thanks to Trump) and suspicion of experts (with a nod to Micheal Gove), it is hard to keep track of what is fact or not.

If you are interested in reading more about the campaign pop over to Arla’s website for the campaign and also their press release about it. There are also loads of useful and interesting article about milk. Google Chrome does a decent translation of the information.

I want to say this is not a sponsored post and the campaign does not necessarily reflect my own views  but I thought as I was curious about the advert others may be too.